Strengthening the Bridge Between the Embryo and Implantation.

Infertility can be caused by many different things, and for 1 in 4 couples a cause cannot be identified. If you’re suffering from fertility problems, there are a number of treatments that can help you become pregnant, and IVF is one of them. IVF is a well-known treatment which has become more and more sophisticated over the years, involving several steps which increase the chances of you becoming pregnant. The last of these steps is the embryo transfer, once they have matured in the laboratory incubator for a few days. The best embryos will be taken from the culture dish and then placed in a thin tube called the catheter, before being carefully guided through the cervix and into the uterus, where the embryo transfer will take place.

There is nothing more natural for the womb than to have an embryo implanted, but that doesn’t mean that there aren’t ways to make implantation, and therefore the chances of a successful pregnancy more likely, and this is where EmbryoGlue comes in. 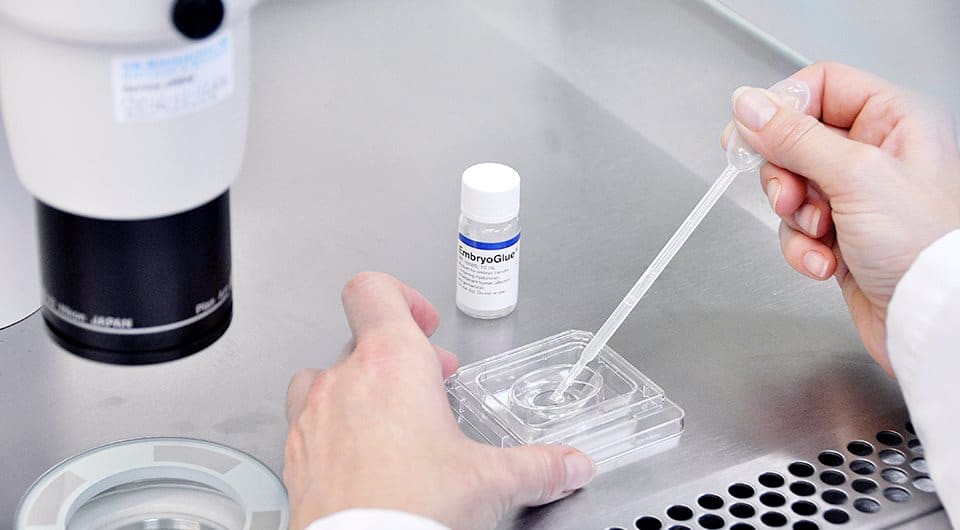 Giving Your Embryo A Helping Hand.

Despite the name, it’s not actually a glue, it’s a substance that the embryo is placed into before transfer, and the way it works is by having a high concentration of hyaluronan and recombinant human albumin – both of which promote implantation.

What is hyaluronan?
This is a molecule in the body which is a natural substance and found in all tissues, it’s also a key element in embryo development and implantation. It’s a naturally occurring molecule which is always present in the womb, but EmbryoGlue has been formulated with a higher concentration of hyaluronan, which mirrors the natural processes whilst enhancing them at the same time.

How does it work?
Using hyaluronan, EmbryoGlue is enriched with the components it needs to better support the embryo during embryo transfer and implantation and thickened so it’s more similar to the fluids already in the womb, and by mixing these two fluids it minimises the chance of embryo drift (LINK).

On the inner wall of the uterus, there are molecules there already, and hyaluronan binds itself to these molecules, creating a ‘bridge’ between the embryo itself and the womb, encouraging the embryo to implant much as would during a natural conception.

EmbryoGlue has been in clinical use since 2003, and it has been shown to significantly increase the chances of a successful pregnancy. In fact, all patients going through IVF procedures which involve embryo transfer can benefit from using it. All it does is augment the natural environment of the uterus to create the optimum surroundings for successful transfer and for implantation. In fact, documented figures show that it’s not only the implantation element that benefits, it also has a positive impact on pregnancy rates, and live birth rates. More than 80% of patients undergoing IVF treatment opt for it to be used during transfer.

EmbryoGlue – a very simple solution which can have a very positive impact on the chances of success for those suffering from infertility.